So I put new lines in my andale flooded font recently and thought I'd share the process. I know there are already some other guides out there, but they mainly seem to be for the fonts with removable bases. I guess mine is an older style. If you have the same this might be useful for you. If you don't stuff around and make the mistakes I initially made I reckon all could be done in an hour.

Tip #1: If you have one of these fonts with the non-removable base, don't stuff around trying to join new lines and pull through with the old lines. It's a waste of time. The clearance past the bottom line washers is tight, a barbed joiner with increase the line size and it wont go through. Whipper snipper line glued inside was also a failure... just pull the old lines through the top and feed new lines in from the bottom.

Tip #2: If your font has been cut close to the bottom like the first pic below (including copper glycol lines) all is not lost. You probably wont be able to squeeze 2 lines and 2 hose clips on the copper stubs but I found some 9.5mm valpar which let me fit both lines then use 1 large hose clamp around both.

Tip #3: The inside of the font has sharp edges particularly going around the 90 degree bends, take your time push/pulling the new line through or you may kink or damage the line. I find pushing from the bottom while pulling from the top worked for me. Only use the pliers on the very end of the line as you don't want to squeeze or kink the line in the font. You can always trim the very end off if it has been damaged by the pliers.

Tip #4: Clean everything before reinstalling. If you can get new seals, washers, etc do it at the same time. 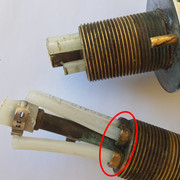 1. Remove back nuts from bottom of font. Top font shows nuts removed already. There are tiny little metal washers under there, they probably wont fall out until you pull the lines but don't lose them! 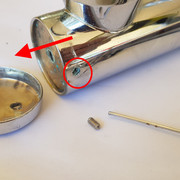 2. The end caps on the font are pressed on. Don't use multigrips or a flat head screw driver to remove them unless you're into scratched chrome. I used an offcut bit of pine up against the lip and lightly tapped it off with a hammer. Once off, you'll see a 2 small holes, one or both of these will have a grub screw which will require a TINY allen key to remove. Find em, unscrew em and don't lose them! 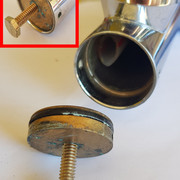 3. To remove the inner plug/seal/thingo thread in an appropriate sized bolt which will then give you something to use to pry out the plug (it's just pressed in not screwed, but i found turning the bolt all the way in then using it to turn the plug broke the seal of the old crusty lube which then allowed me to pry out). I just happened to find a bolt in my toolbox that was perfect, I'll take it to the hardware and test the thread and size and let you know). Note: Get 2 bolts, once the plug is out you wont be able to remove the bolt until it's back in and locked with the grub screw. You don't wanna grab this plug with your multi's and damage it, so just get the second bolt and leave them in until you're reinstalling. 4. Undo the tap connectors and pull them out. If you have a tap connector on the central column this should pull out easily with the line (you may need to push a little from the bottom up to crack the old crusty lube). The taps on the ends are harder due to the angles, they may stretch and break in the font. You can either pull the connector just enough to cut the line and pull out through the side or try and pull back down through the bottom. Be mindful of the little washers around the line in the base of the font! If you have really short glycol stubs like I do, it's best to sort out your glycol hoses now with the beer lines out of the way. I found some valpar that was pretty close and softened it in boiling water and flared it over the copper lines. Once it was cool I removed them and put them aside for reinstallation at the end. 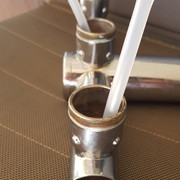 5. Check the bottom of the font where the lines go in and pry out any of the little washers that didn't volunteer when you removed you lines. Put them somewhere safe! Prep your new line lengths (you will need some extra length to work on the tap connectors, line is cheap, make em longer than you think you need and trim them off the bottom later if required). I filled the line holes in the bottom of the font with lube AND lubed the lines. Push them in from the bottom, do the side lines first and the middle line last. When the line is visible through the centre tap hole you can use your fingers, wire or pliers to direct it left or right depending on which hole you started with at the bottom, keep pushing until you can see it through the tap hole you want it to come out and snag it with your wire hook or pliers and pull through. repeat for the other side, then do the centre line. 6. Remove the compression fitting from back of tap connectors. Cut the line leaving 5-10mm of line on the back. 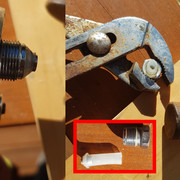 7. You can use a vice but I found the multigrips worked nicely for removing the olives. Grip around the hex part of the nut, NOT THE THREAD! If you grab on to the thread here you're buggered. With the old beer line stub facing up, rest the tip of your multis on something to give clearance underneath and lightly tap the old line with a hammer to drive the olive out of the back nut. Once the olive is out, use a stanley knife to split the line and retrieve the olive. Don't lose it! 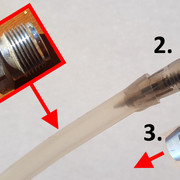 8. Put the kettle on, make the mrs a tea and yourself hot mug of water. Then put the back nut on the line (1.) making sure it's facing the right way. Dip the end ~5mm of your new line in the water for 5-10 seconds to slightly soften and then use the end of the pen to flare it open (2.). Push in your olive to the newly flare line (tapered end goes inwards). Repeat on other lines.


9. Screw compression fittings back into tap connectors. Push/pull the line back down the font to seat the tap connectors on the font, then screw connectors back on. Feed the small bottom washers over the line on the bottom of the font and seat them back in there holes with a bit of keg lube then reinstall back nuts to bottom of font.


10. Clean and lube the brass sealing plugs from the top of the font and tap them back into place. Using the still attached bolt, rotate the sealing plug until the hole in the font and the plug line up so you can reinstall the grub screw. Remove bolt and gently tap the end cap back on. 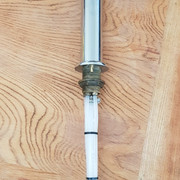 12. Drink your pint while basking in the glory of you're newly re-lined font and thinking about the other 5 fonts you have to do...